In part one of this series we discussed some early attempts at automation, some more successful than others. Surprisingly, we can push the history of automation back even further to about 762 B.C. in ancient Greece. In Homer’s Illiad, he discusses the workshop of Hephaestus and the automatons that worked for him. These automatons were basically mechanical robots that served different purposes. For example, his tripodes khryseoi (golden tripods) were wheeled tripods that would wheel themselves in and out of the halls of the gods during the great feasts as they were needed. There were at least seven other named automatons used to carry out various tasks and missions. Although these automatons lived only in the realm of myth (as far as we know), the fact that automation was already being pondered in the 8th century BC is amazing in itself.

Pushing forward many centuries we find more solid evidence of real automation which laid the groundwork for modern business process automation and our process automation platform, Apptitude. In the 12th century AD, Ismail Al-Jazari created his famous Castle Clock. This clock was renowned in its day for its magnificence and accuracy in telling time, but its foreshadowing of automation is undeniable. Replicas of this clock can be found throughout the world today, including the United States. Through trial and error, Al-Jazari used gears, chains, wood, metal, a float chamber, flow regulator, and water to make the huge clock work. Every hour, doors would open automatically to reveal a figurine, and two gold falcon automata would drop balls into vases waiting below. Automata were a highlight of this wonder. Three times a day, five robotic, mechanical musicians would automatically perform musical pieces when activated by a water-driven camshaft. They would be activated by a system of pulleys, water trough and a water-powered “scoop” wheel. The clock also featured several displays, including the lunar and solar orbits and the zodiac. A crescent moon-shaped disc would move across the frieze indicating minutes.

In 1804 an inventor in France had developed several types of looms; including one with a treadle for power and another for weaving fishing nets. But Joseph Jacquard’s most famous invention was an automatic mechanical loom that used pasteboard cards with punched holes to control the process of weaving complex patterns. Prior to this invention, weaving intricate, figured designs was a slow and very laborious process. It required two operators: the skilled weaver and the draw boy to operate the loom. Jacquard felt there had to be a way to simplify the process for weaving complex patterns, and that a mechanism could be developed to make this happen. After much experimentation and trial and error, Jacquard succeeded in making the first programmable loom. Many hundreds or even thousands of these cards would be strung together, each card representing one row of the woven design. Jacquard’s invention was a landmark in computing history and not a fly-by-night fad by any means, since punched cards for computing were in use until the 1980s. 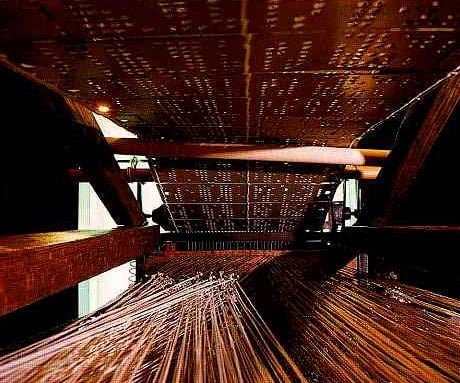 Onit would like to pay homage to these and all inventors whose ideas were guiding lights and blazed the path to the modern process automation. Every business process automation platform, including Apptitude, truly has a deep heritage going back many centuries.